Painful ear infections are a rite of passage for babies and children—by the age of five, nearly every child has experienced at least one episode. Most ear infections either resolve on their own (viral) or are effectively treated by antibiotics (bacterial). But sometimes ear infections and/or fluid in the middle ear may become a chronic problem leading to other issues, such as hearing loss, or behavior and speech problems. In these cases, insertion of an ear tube by an otolaryngologist (ear, nose, and throat specialist) may be considered.

what is an ear infection?

An ear infection occurs when one of your eustachian tubes becomes swollen or blocked, causing fluid to build up in your middle ear. Viruses or bacteria get caught in the middle ear as a result.

WHAT IS THE MIDDLE EAR?

While the main issue with a middle ear infection is pain and irritability, the main concern with lingering middle ear fluid is hearing. The fluid prevents the eardrum from moving appropriately so sound does not get conducted to the inner ear well. Fortunately, the hearing should return to normal once the fluid resolves.

what are ear tubes?

These tubes can be made out of various materials and may have a coating intended to reduce the possibility of infection. There are two basic types of ear tubes: short-term and long-term. Short- term tubes are smaller and typically stay in place for six months to a year before falling out on their own. Long-term tubes are larger and have flanges that secure them in place for a longer period of time. Long-term tubes may fall out on their own, but removal by an otolaryngologist may be necessary. 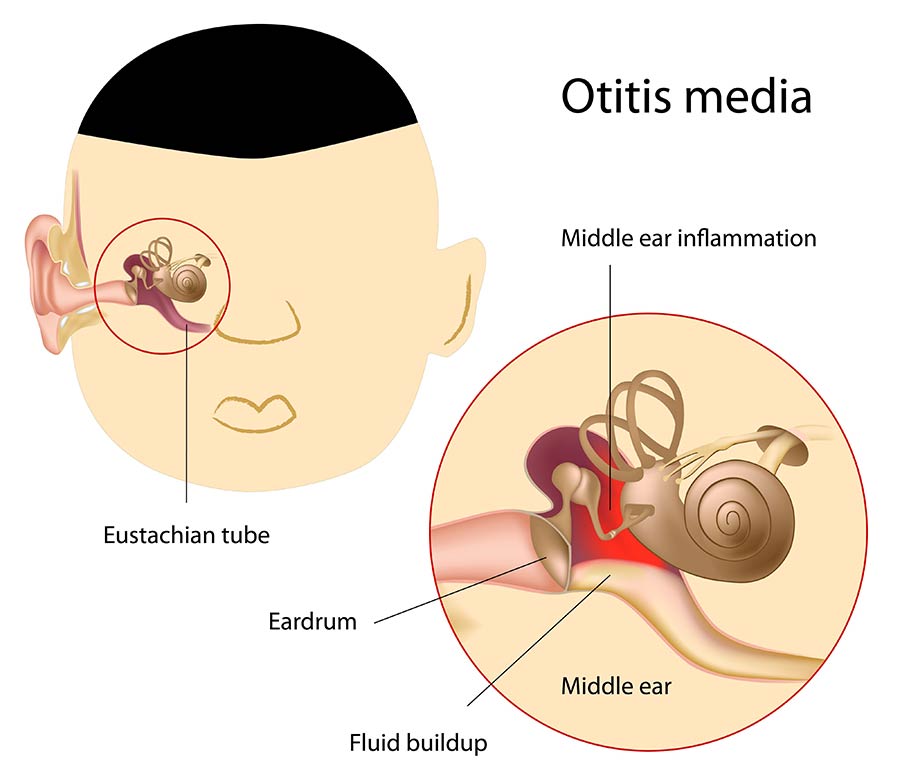 Ear tubes are for patients with chronic ear infections (otitis media with effusion). These conditions most commonly occur in babies and children, but can also be present in teens and adults and can lead to speech and balance problems, hearing loss, or changes in the structure of the ear drum. Other less common conditions that may warrant the placement of ear tubes are malformation of the ear drum or eustachian tube, Down Syndrome, cleft palate, and barotrauma (injury to the middle ear caused by a reduction of air pressure, usually seen with altitude changes as in flying and scuba diving).

Each year, more than half a million ear tube surgeries are performed on children, making it the most common childhood surgery performed with anesthesia. The average age for ear tube insertion is one to three years old. Inserting ear tubes may:


what happens during ear tube surgery?

Ear tubes are inserted through an outpatient surgical procedure called a myringotomy. A myringotomy refers to an incision (small hole) in the ear drum or tympanic membrane. This is most often done under a surgical microscope with a small scalpel, but it can also be accomplished with a laser. If an ear tube is not inserted, the hole would heal and close within a few days. To prevent this, an ear tube is placed in the hole to keep it open and allow air to reach the middle ear space (ventilation).


A general anesthetic is administered for young children. Some older children and adults may be able to tolerate the procedure without anesthetic. A myringotomy is performed and the fluid behind the ear drum (in the middle ear space) is suctioned out. The ear tube is then placed in the hole. Ear drops may be administered after the ear tube is placed and may be prescribed for a few days. The procedure usually lasts less than 15 minutes and patients awaken quickly.

Sometimes the otolaryngologist will recommend removal of the adenoid tissue (lymph tissue located in the upper airway behind the nose) when ear tubes are placed. This is often considered when a second or third tube insertion is necessary. Current research indicates that removing adenoid tissue concurrent with placement of ear tubes can reduce the risk of recurrent ear infections and the need for repeat surgery.

After surgery, the patient is monitored in the recovery room and will usually go home within an hour or two if no complications occur. Patients usually experience little or no postoperative pain, but grogginess, irritability, and/or nausea from the anesthesia can occur temporarily.

Hearing loss caused by the presence of middle ear fluid is immediately resolved by surgery.

The otolaryngologist will provide specific postoperative instructions, including when to seek immediate attention and to set follow-up appointments. He or she may also prescribe antibiotic ear drops for a few days. An audiogram should be performed after surgery, if hearing loss is present before the tubes are placed. This test will make sure that hearing has improved with the surgery.

To avoid the possibility of bacteria entering the middle ear through the ventilation tube, physicians may recommend keeping ears dry by using ear plugs or other water-tight devices during bathing, swimming, and water activities. However, recent research suggests that protecting the ear may not be necessary. Parents should consult with the treating physician about ear protection after surgery.

Consultation with an otolaryngologist (ear, nose, and throat specialist) may be warranted if you or your child has experienced repeated or severe ear infections, ear infections that are not resolved with antibiotics, hearing loss due to fluid in the middle ear, barotrauma, or have an anatomic abnormality that inhibits fluid drainage from the middle ear.

Myringotomy with insertion of ear tubes is an extremely common and safe procedure with minimal complications. When complications do occur, they may include:

• Perforation—This can happen when a tube comes out or a long-term tube is removed and the hole in the tympanic membrane (ear drum) does not close. The hole can be patched through a surgical procedure called a tympanoplasty or myringoplasty.

• Scarring—Any irritation of the ear drum (recurrent ear infections), including repeated insertion of ear tubes, can cause scarring called tympanosclerosis or myringosclerosis. In most cases, this causes no problem with hearing.


• Infection—Ear infections can still occur in the middle ear or around the ear tube. However, these infections are usually less frequent, result in less hearing loss, and are easier to treat—often only with ear drops. Sometimes an oral antibiotic is still needed.

• Ear tubes come out too early or stay in too long—If an ear tube expels from the ear drum too soon (which is unpredictable), fluid may return and repeat surgery may be needed. Ear tubes that remain too long may result in perforation or may require removal by an otolaryngologist.

CEENTA has ear, nose, and throat doctors throughout North and South Carolina who specialize in ear tube surgery.

Reprinted from http://www.entnet.org/HealthInformation/patients.c... with permission of the American Academy of Otolaryngology – Head and Neck Surgery Foundation, copyright (C) 2009. All rights reserved.


Schedule an Appointment with a CEENTA ENT doctor

Ear InfectionsAn ear infection occurs when one of your eustachian tubes becomes swollen or blocked, causing fluid to build up in your middle ear.
This website is optimized for more recent web browsers. Please consider these upgrade options: IE10+ (