What is a deviated septum?

The septum is the thin wall between your nasal passages. It is supposed to run straight down the center of the nose. When it deviates, or has moved to one side, it can block that side of the nose and reduce airflow. The septum can be deviated at birth, or it can become deviated from an injury. Most people have at least a slightly deviated septum. However, a significantly deviated septum can cause difficulty breathing, recurrent rhinitis, or sinusitis.

Signs of a deviated septum include:

How is a deviated septum treated?

In some cases, a deviated septum can be treated with medicine, including decongestants, antihistamines, or nasal steroid sprays. In others, a surgical procedure called a septoplasty may be necessary. 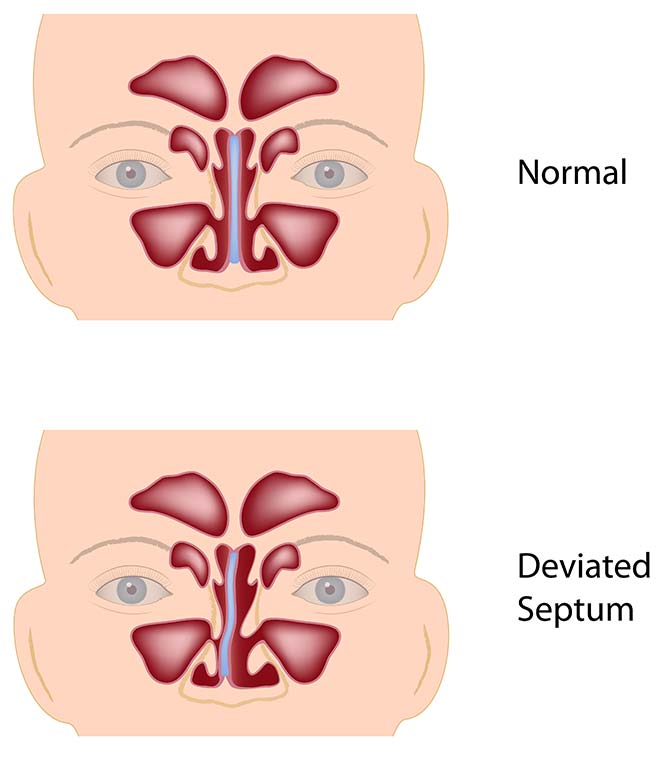 During a septoplasty, the surgeon goes through the nostril to make an incision in the lining of the septum. They would then trim or straighten the cartilage. It may also be necessary to make cuts in the nasal bones to reposition them. After the septum is straightened, small splints may be inserted. Local or general anesthesia is used. In some cases, septoplasties are performed along with other sinus or nasal procedures.

The procedure should take about 60 minutes, with a recovery of up to several weeks. Post-op swelling or discoloration is rare unless there are unusual complications. The nasal tissues should stabilize 3-6 months after surgery, although it can take up to a year.

Turbinate surgery is often performed at the same time as septoplasty. Turbinates are shelves of tissue that project into each nasal passage. They can become excessively enlarged due to a deviated septum, underlying allergies, or other causes. Surgery can reduce enlarged turbinates back to a more normal size.

WHAT ARE THE POTENTIAL BENEFITS OF A SEPTOPLASTY?

The primary benefit is improved breathing through the nose. In fact, septoplasty, with or without turbinate surgery, significantly reduces nasal obstruction in more than 85% of cases. Obviously, improvement cannot be guaranteed in every case.

Nasal surgery is less likely to help with headaches, nasal drainage, and sinus infections. While these symptoms may improve, the main goal is better nasal breathing.

In regards to snoring, nasal surgery is beneficial in only 20% of cases. Snoring and sleep apnea are usually due to throat obstruction, not nasal obstruction. As such, throat surgery and palatal procedures are more effective snoring treatments.

WHAT ARE THE RISKS?

Risks include, but are not limited to, the following:

Fortunately, nasal surgery is commonly performed by ENT physicians and these complications occur in less than 2% of cases.

recovery and restrictions from septoplasty

After deviated septum surgery, patients should avoid strenuous activities, such as aerobics or other activities that could cause a blood pressure elevation. They may experience some congestion, but they should not blow their noses. They should instead use nasal spray to manage any congestion. They should also elevate their heads when sleeping, and they should wear clothes that fasten in the front instead of those that are pulled over the head.

CEENTA's ENT physicians see patients for deviated septums in locations across North and South Carolina. They are trained in the most up-to-date surgical techniques and patient care.

Deviated Septum and SeptoplastyA septoplasty is a surgical procedure to straighten a deviated septum. The septum is supposed to run straight down the center of the nose. When it deviates, it can block one side of the nose and reduce airflow.
This website is optimized for more recent web browsers. Please consider these upgrade options: IE10+(