Neurotologists and otologists are board-certified otolaryngology doctors with specialty training in the medical and surgical care of patients, both adult and pediatric, with diseases that affect the inner ears, balance system, temporal bone, skull base, and related structures of the head and neck. They treat hearing loss, ringing in the ears, dizziness, infectious and inflammatory diseases of the inner ear, congenital malformations of the ear and tumors in the inner ear. 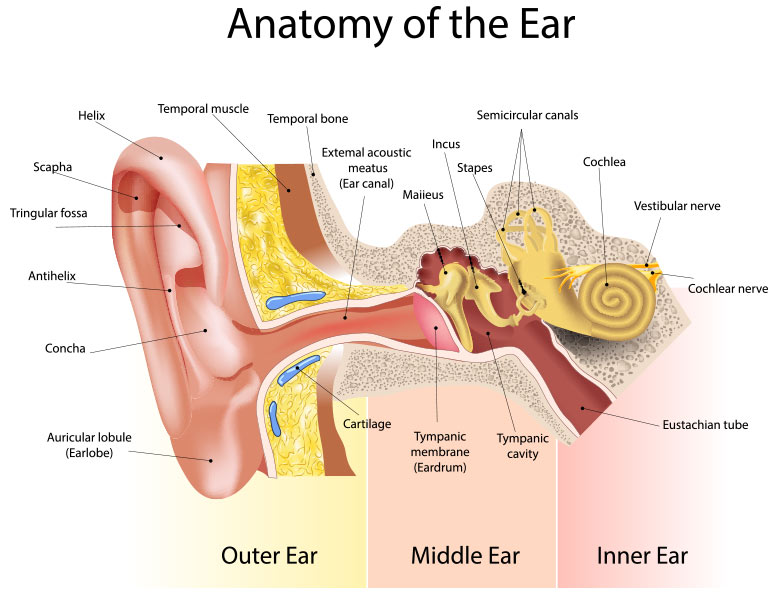 Acoustic neuromas, also known as vestibular schwannomas, are benign ear tumors that develop on the main nerve leading from the inner ear to the brain. They can directly affect balance and cause hearing loss. They normally grow very slowly, although in some cases they grow quickly and large enough to press against the brain and interfere with vital functions. Symptoms include hearing loss, tinnitus, loss of balance, vertigo, and facial weakness.

Cholesteatomas are abnormal skin growths in the middle ear behind the eardrum. They often develop as cysts or pouches that shed layers of old skin. If they continue to grow they can damage the bones of the middle ear. This can lead to temporary hearing loss. Permanent hearing loss, dizziness, and facial muscle paralysis are rare but possible. Cholesteatomas are most often caused by repeated ear infections or a tearing of the eardrum. In rare cases, they are present at birth. Symptoms include drainage of a foul-smelling odor, a feeling of fullness or pressure in the ear, hearing loss, an earache, dizziness, or muscle weakness on one side of the face.

The cochlear implant is a device that provides electrical stimulation to the cochlea, which results in the perception of hearing. They are designed for children 12 months of age and older who have not obtained adequate hearing through hearing aids for the development of speech and language, and for adults who have lost so much hearing that conventional hearing aids are not enough to allow them to communicate adequately. The cochlear implant consists of two parts, one internal and one external. The internal portion of the device is implanted into the cochlea during a 2-3-hour surgical procedure. Following a period of healing, the external portion of the device is programmed for optimal hearing during a series of appointments with an audiologist. The external portion of the device is becoming smaller and smaller and many of the devices are now available in a size that resembles a large behind-the-ear hearing aid.

Glomus tumors, also known as paragangliomas, are slow-growing and usually benign growths that can block sound transmission in the middle ear. Larger paragangliomas can invade temporal bone structures, such as the facial nerve or inner ear. In rare cases, they can produce hormones, which can cause sweating, flushing headaches, and rapid heartbeats. Paragangliomas are usually due to genetic predisposition.

Paragangliomas are treated through observation, radiation therapy, or surgical removal. The final treatment plan depends on a number of factors, including the patient’s health and age, the size and location of the tumor, and the severity of the symptoms.

Otosclerosis is a condition of abnormal bone growth around the stapes bone, which causes the stapes bone to remain rigid. This bone must move freely for people to hear properly. Symptoms include a gradual hearing loss, dizziness, balance problems, and tinnitus. It is estimated that 10 percent of the adult Caucasian population is affected by otosclerosis, with Caucasian, middle-aged women at most risk. It is less common in people of Asian and South American descent, and is rare in African Americans. About 60 percent of people with the condition have a genetic predisposition to it.

In cases of mild hearing loss, the ENT doctor may suggest using hearing aids. Sodium fluoride can also slow the progression of the disease. Sometimes, an outpatient surgical procedure known as a stapedectomy – in which the stapes bone is removed and replaced with a prosthetic – may be performed.

Perforation of the eardrum

A perforated eardrum is a hole in the tympanic membrane. They are caused by infection, chronic Eustachian tube disorders, or injury. Injuries can include direct strikes to the ear, skull fractures, explosions, or if objects are pushed too far into the ear canal. Perforated eardrums lead to decreased hearing and an increased chance of infection, which may cause a liquid discharge. It may also cause pain if exposed to water.

CEENTA's neurotologists - located in the SouthPark office - are specially trained in the most up-to-date care using the newest treatment options.

Neurotology/OtologyNeurotologists and otologists are board-certified otolaryngology doctors with specialty training in the medical and surgical care of patients, both adult and pediatric, with diseases that affect the inner ears, balance system, temporal bone, skull base, and related structures of the head and neck. They treat hearing loss, ringing in the ears, dizziness, infectious and inflammatory diseases of the inner ear, congenital malformations of the ear and tumors in the inner ear.
This website is optimized for more recent web browsers. Please consider these upgrade options: IE10+(