This year, more than 63,000 Americans will develop cancer of the head and neck (most of which is preventable). More than 13,000 of them will die from it.

As many as 90 percent of head and neck cancers arise after prolonged exposure to specific risk factors. Use of tobacco (cigarettes, cigars, chewing tobacco, or snuff) and alcoholic beverages are the most common cause of cancers of the mouth, throat, voice box, and tongue. In adults who do not smoke or drink, cancer of the throat can occur as a result of infection with the human papilloma virus (HPV). Prolonged exposure to sunlight is linked with cancer of the lip and is also established as a major cause of skin cancer. 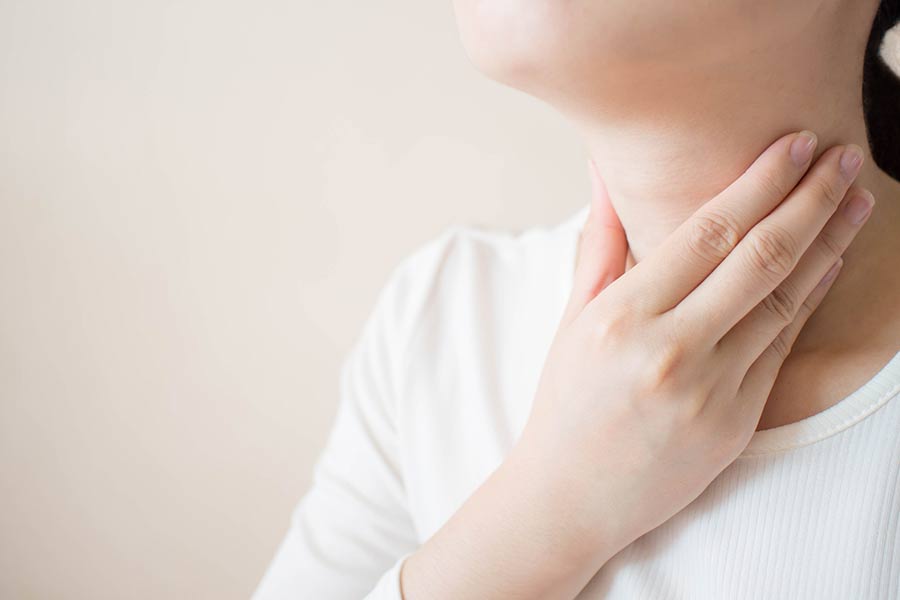 Tobacco use is the most preventable cause of these deaths. In the United States, up to 200,000 people die each year from smoking-related illnesses. The good news is that this figure has decreased due to the increasing number of Americans who have quit smoking. The bad news is that some of these smokers switched to smokeless or spit tobacco, assuming it is a safe alternative. This is untrue. By doing so, they are only changing the site of the cancer risk from their lungs to their mouths. While lung cancer cases are decreasing, cancers in the head and neck appear to be increasing, but the majority can be curable if caught early. Fortunately, most of these cancers produce early symptoms. You should know the potential warning signs so you can alert your doctor as soon as possible. Remember—successful treatment depends on early detection. Knowing and recognizing its signs can save your life.

signs and symptoms of head and neck cancer

A lump in the neck. Cancers that begin in the head or neck usually spread to lymph nodes in the neck before they spread elsewhere. A lump in the neck that lasts more than two weeks should be seen by a physician as soon as possible. Of course, not all lumps are cancer. But a lump (or lumps) in the neck can be the first sign of cancer of the mouth, throat, voicebox (larynx), thyroid gland, or of certain lymphomas and blood cancers. Such lumps are generally painless and continue to enlarge steadily.

Change in the voice. Most cancers in the larynx cause some changes in voice. An otolaryngologist is a head and neck specialist who can examine your vocal cords easily and painlessly. While most voice changes are not caused by cancer, you shouldn’t take chances. If you are hoarse or notice voice changes for more than two weeks, see your doctor.

A growth in the mouth. Most cancers of the mouth or tongue cause a sore or swelling that doesn’t go away. These may be painless, which can be misleading. Bleeding may occur, but often not until late in the disease. If an ulcer or swelling is accompanied by lumps in the neck, you should be concerned. In addition, any sore or swelling in the mouth that does not go away after a week should be evaluated by a physician. Your dentist or doctor can determine if a biopsy (tissue sample test) is needed and can refer you to a head and neck surgeon who can perform this procedure.

Bringing up blood. This is often caused by something other than cancer. However, tumors in the nose, mouth, throat, or lungs can cause bleeding. If blood appears in your saliva or phlegm for more than a few days, you should see your physician.

Swallowing problems. Cancer of the throat or esophagus (swallowing tube) may make swallowing solid foods—and sometimes liquids—difficult. The food may “stick” at a certain point and then either go through to the stomach or come back up. If you have trouble almost every time you try to swallow something, you should be examined by a physician. Usually a barium swallow x-ray or an esophagoscopy (direct examination of the swallowing tube with a scope) will be performed to find the cause.

Changes in the skin. The most common head and neck cancer is basal cell cancer of the skin. Fortunately, this is rarely serious if treated early. Basal cell cancers appear most often on sun-exposed areas like the forehead, face, and ears, but can occur almost anywhere on the skin. Basal cell cancer often begins as a small, pale patch that enlarges slowly, producing a central “dimple” and eventually an ulcer. Parts of the ulcer may heal, but the major portion remains ulcerated. Some basal cell cancers show color changes. Other kinds of cancer, including squamous cell cancer and malignant melanoma, also occur on the head and neck. Most squamous cell cancers occur on the lower lip and ear. They may look like basal cell cancers, and if caught early and properly treated, usually are not dangerous. If there is a sore on the lip, lower face, or ear that does not heal, consult a physician. Malignant melanoma typically produces a blue-black or black discoloration of the skin. However, any mole that changes size, color, or begins to bleed may mean trouble. A black or blue-black spot on the face or neck, particularly if it changes size or shape, should be seen as soon as possible by a dermatologist or other physician.

Persistent earache. Constant pain in or around the ear when you swallow can be a sign of infection or tumor growth in the throat. This is particularly serious if it is associated with difficulty in swallowing, hoarseness, or a lump in the neck. These symptoms should be evaluated by an otolaryngologist.

What you should do. All of the symptoms and signs described here can occur with no cancer present. In fact, many times complaints of this type are due to some other condition. But you can’t tell without an examination. So if they do occur, see your doctor to be sure.

Tonsil and tongue cancer related to HPV can be removed through surgery with a Da Vinci robot. During tongue cancer surgery the tongue can be rebuilt with tissue from other parts of the body.


Thyroidectomies are often performed as outpatient surgery, although some patients need to stay in the hospital overnight for larger tumors.


Nasal and sinus cancers can often be removed endoscopically, without any incisions.

If a larger cancer invades the jawbone, requiring removal of a portion of the bone, surgeons can rebuild it using the fibula at the same time the tumor is removed.

During removal of skin cancer, tissue can be transferred to cover the area from where the tumor was removed.

Patients with voice box cancer can often have their tumors removed with only a partial voice box removal, depending on the tumor’s size.

Removal of parotid tumors can be either outpatient or require an overnight stay. Doctors can do facelifts to try and hide the scars.

Of course, each patient's case is unique, and your doctor will discuss the available options for your particular case prior to treatment.

Remember—when found early, most cancers in the head and neck can be cured with few side effects. Cure rates for these cancers could be greatly improved if people would seek medical advice as soon as possible. CEENTA's head and neck cancer specialists - who practice in SouthPark, Concord, and Pineville - provide the most up-to-date care using the newest treatment options.

Play it safe. If you detect warning signs of these cancers, see your doctor immediately, and practice health habits that help prevent these diseases.

Reprinted from http://www.entnet.org/HealthInformation/patients.c... with permission of the American Academy of Otolaryngology – Head and Neck Surgery Foundation, copyright (C) 2009. All rights reserved.

Head and Neck CancerThe most common cause of head and neck cancer includes the mouth, throat, voice box, and tongue.
This website is optimized for more recent web browsers. Please consider these upgrade options: IE10+(