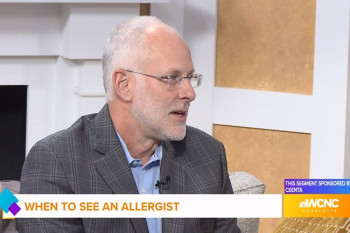 Transcript of the Interview:

Mia Atkins: This morning, we're talking fall allergies, and we're talking about that with Dr. Roy Lewis from Charlotte Eye Ear Nose & Throat Associates. Let's talk about the common allergies that people are seeing right now in the Charlotte area.

Dr. Roy Lewis: So right now, we have our grasses and our weeds, and we're actually on the downward side of that and so those are almost gone. And then we'll have our yearly allergens for the rest of the year, which is our dust mites, our cat, dog, and mold.

Mia: And I know that people including myself are really struggling with that because there's so many symptoms that come with it, and it's hard to know how to treat those at home. So can we treat them at home?

Dr. Lewis: Most patients can actually very successfully treat them at home. First start is just a top oral antihistamine, so Allegro, Claritin, Zyrtec, something like that. After that, you go to the topical nasal steroid spray. Now the downside on the topical nasal steroid spray is it takes about four weeks to be fully effective, and most patients won’t use that “two squirts, both sides, once a day every day,” for four weeks.

Mia: Okay, and then you and I were talking before that if you have an issue like I do or your eyes just feel super dried out, you can use some eye drops for that.

Mia: And when should we take the next step and go see an allergist?

Dr. Lewis: So you've done the medication for four weeks. You've done Flonase for four weeks and you're still having symptoms. That would be the time to come in. We have some patients that can't tolerate the nose sprays or just don't like using those sprays and they'll come in sooner than that.

Mia: Okay, and what are some of the common causes of the nasal congestion, because I think a lot of people deal with that too.

Dr. Lewis: Correct, so allergy is obviously very big cause of nasal congestion. You can also have anatomic considerations. You can have a septal deviation, you can have inferior turbinate hypertrophy. The septum’s a partition between the two sides. The turbinate is a vascular structure that hangs off the side wall, and with allergies it will swell and with pollution it'll swell. And so those are two anatomic considerations. You could have – luckily it's not very common at all – but you could have a benign tumor in your nose, and we see polyps. But allergy is definitely the biggest one.

Mia: Okay, and never heard of this, which is immunotherapy for allergies. How exactly does that work?

Dr. Lewis: The immunotherapy has actually been around for centuries, which is kind of wild. We give you a little bit of what you're allergic to in a form of a shot so everybody has their allergy shots. It's also called subcutaneous immunotherapy. We give you a tiny, tiny little needle in the arm, and we start at a low dose and we build that up. Most patients that are on shots will do shots for three-to-five years, and then they can go off shots for a while.

There's also sublingual immunotherapy. Patients really like that better because it's more portable, and so they put drops under their tongue. The first drop is in the office and then after that you're at home. And so those are specific for the patient. The downside of sublingual is it's not covered by most insurance plans. Now there's a sublingual pill for grasses, weeds and dust mites – so three different pills – that is covered by some insurances. Not by Medicare, but by some insurances. Also under the tongue at home so very portable okay

Mia: okay, I know a lot of people are dealing with this this time of year especially, with everything that’s in the air. So people may be wanting to come see you. I know you're at the Morrisville location, right? Where is that at?

Mia: Very exciting, and there are a ton of other locations in the area that people can go visit, and they can find all of those at ceenta.com. Thanks for being here today.

Dr. Lewis: Thank you, it was great to be here. Do Air Filters Help with Allergies? Ask CEENTA and Morris-Jenkins

Did you know that your air filter can affect your allergies? Learn more about fall allergy prevention from CEENTA and Morris-Jenkins. Why is My Child Breathing So Loudly?

Is your child dealing with stridor or noisy breathing? Find out what the cause could be and how it can be treated at CEENTA.