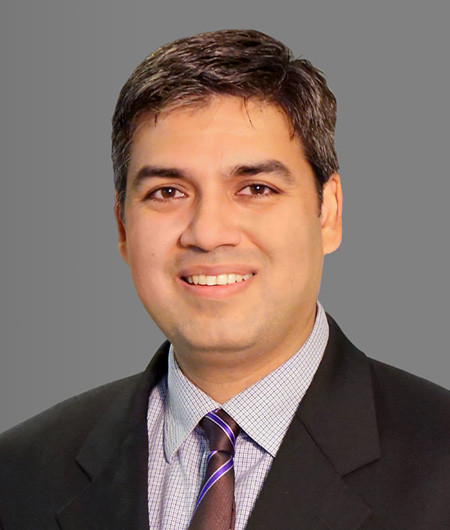 Dr. Omar Punjabi is a board-certified ophthalmologist. He specializes in vitreo-retinal diseases and surgery at Charlotte Eye Ear Nose and Throat Associates (CEENTA) in Charlotte, North Carolina. He practices at the South Park, Matthews, and Concord offices.

Dr. Punjabi was born in Mumbai, India, where he received a Gold medal and the highest honor among more than 125,000 students competing for medical school. He graduated with top honors and a full academic scholarship from King Edward Memorial Hospital, which is the top medical school in Mumbai and among the top five schools in India. He moved to the United States after medical school for further training. He spent two years as a post-doctoral research fellow involving retinal imaging at the Bascom Palmer Eye Institute in Miami (the highest ranked eye hospital in the United States). Dr. Punjabi then did his internship at the University of Miami, followed by residency training at Northwestern University in Chicago where he was selected as chief resident. After residency training, he completed his two-year fellowship training in retinal diseases and vitreo-retinal surgery at the prestigious Cole Eye Institute of the Cleveland Clinic.

Dr. Punjabi has published over 30 peer-reviewed articles and presented numerous scientific abstracts and textbook chapters. When he was a post-doctoral research fellow at the Bascom Palmer Eye Institute, he was part of the team that was involved in the groundbreaking development of the spectral domain OCT used for retinal imaging. He was the recipient of a prestigious National Eye Institute research grant in 2006 from ARVO. He has won several academic awards and scholarships during his residency training and during medical school. He received the best resident award in all three years of residency at Northwestern for his clinical, academic, and research performances. He secured 99th percentile in the Ophthalmology Knowledge Assessment Program (OKAP) and also in the Ophthalmology Board Examination. He also received several research awards, including the Beem-Fisher Award from the Chicago Ophthalmological Society in 2010 and the Research Award from Northwestern University in 2010. During fellowship training, he received the Best Fellow Teacher of the Year award from the Cleveland Clinic. He was also the recipient of the exclusive Heed Fellowship from the Heed Ophthalmic Foundation, which is given to only a few fellows with excellent clinical, academic and research potential.

His areas of interest include medical and surgical diseases of the retina and vitreous, including retinal detachment, age-related macular degeneration, retinal vascular diseases, diabetic retinopathy, ocular trauma and uveitis.

Dr. Punjabi has an active North Carolina Medical license and practices at the South Park, Matthews, and Concord offices.

During his free time, Dr. Punjabi enjoys spending time with his wife and two young kids. He is an avid sportsperson, and enjoys hiking and traveling.

Board Certified by:
- American Board of Ophthalmology

Vitrectomy Surgery for Vitreo-Retinal Diseases: This is an outpatient surgical procedure commonly performed for management of multiple retinal diseases, including retinal detachment, diabetic retinal disease, bleeding in the eye, macular holes, epiretinal membranes, and other conditions. I enjoy providing sight-saving surgery to my patients, and with today's technological advances most cases are quick, highly successful and need no stitches, leading to a quick recovery and excellent outcomes.

Retinal Lasers and Intravitreal pharmacotherapy for macular degeneration and diabetic retinopathy: These are in-office, minimally-invasive procedures that have dramatically improved the prognosis of these common blinding eye diseases. Most patients have a significant improvement in vision, which was not possible just a few years ago.

Dr. Punjabi has given continuing education talks including:

"How to Approach the Retinal Patient"
"Retina Potpourri"
"Think Like a Vitreo-Retinal Surgeon"
"Optical Coherence Tomography: Basics, Recent Advances, Its Application in Clinic"

I woke up with a retinal bleed two days before Christmas in 2016. I went to my doctor, who confirmed it, and sent me to see Dr. Punjabi.     - Susan M.
Read More
I’ve never had vision in my right eye, and one Sunday recently I experienced something I had never experienced in my left eye. I was seeing some flashes of light and some black spots, so the next day I called CEENTA, and that day I saw Dr. Spicola and Dr. Punjabi.     - Sonya M.
Read More
When I first came to Dr. Punjabi I couldn’t read the license plate on the car in front of me with that eye. Right now it’s cleared up so I can see almost as well as before I had the eye occlusion, so we’ll see how things look the next time I get an X-Ray.     - Eric B.
Read More

Presented research at national and international scientific meetings such as AAO, ARVO and ASRS.

Dr. Punjabi and Dr. Andrew Antoszyk co-authored a paper about a rare case of a maggot that had found its way into the eye, and was swimming under the retina. Dr. Antoszyk immediately lasered and killed it in the office and the patient's eyesight was restored. Dr. Punjabi presented the case at the 2018 American Society of Retina Specialists meeting. It was described as one of the best cases of the year. The paper, "'Pacman' Invasion of the Retina," was published in Retina Today, November/December 2018.