What are benign laryngeal lesions?

Benign laryngeal lesions are defined as abnormal growths of the vocal folds or the larynx (voice box) that are NOT cancerous. 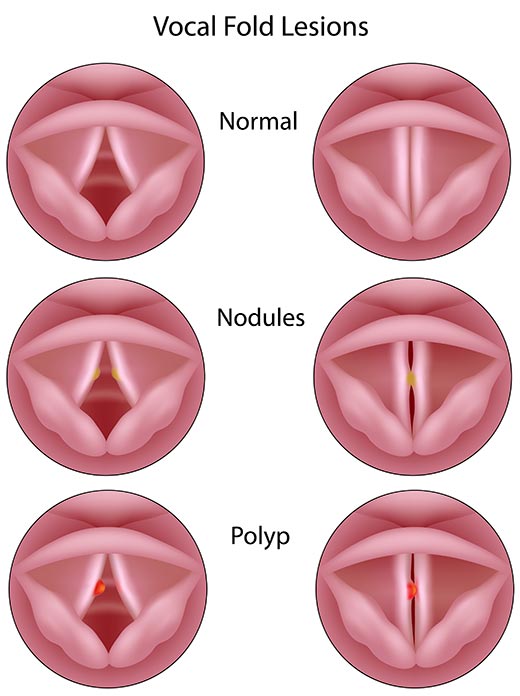 Very common lesions that are characterized as inflammation and degeneration of the SLLP (superficial layer of the lamina propria). They can vary in size from pinpoint to pea size. They typically occur on both vocal folds in the anterior 1/3 and can be considered acute (recent vocal trauma) or chronic (long term vocal misuse). The longer the lesions and the vocal misuse are present, the more likely the lesions have become stiff and more difficult to resolve. They are often seen in children that are loud (males) and young adult females. The best form of treatment is voice therapy.

Fluid-filled lesion usually found in the middle 1/3 of one vocal fold also arising from the SLLP. They often have an active blood supply and can enlarge quickly. They have different appearances such as blister-like, hanging from a stalk, or encompassing a large portion of the membranous vocal fold. Polypoid degeneration often occurs with chronic smokers and obscures the true folds completely. The opposite extreme is mild Reinke’s edema where there are smaller areas of swelling. The larger lesions often require surgery with pre- and post-voice therapy for best results.

These benign lesions are generally unilateral or occurring only in one of the vocal folds. Often they are found deeper than the outer tissue layers and are referred to as intracordal cysts. The cyst is generally firm but fluid-filled, causing overall stiffness to the fold and reduced mucosal wave and amplitude of vibration. They can occur closer to the leading edge of the fold, making diagnosis more tricky with possible confusion for a nodule or polyp. They can occur congenitally but have been reported to occur due to vocal abuse or due to a mucous gland blockage. Etiology of this lesion remains largely unknown. Bilateral cysts are rare but have been seen. Treatment generally involves both surgical intervention and pre- and post-surgical voice therapy.

These lesions are caused by irritation to the posterior larynx in the area of the arytenoids (cartilages that connect to the vocal folds and to various muscles that control the movement of the vocal folds). This irritation can be in the form of vocal misuse such as using a lower voice pitch than is natural, chronic coughing or throat clearing, or LPR (reflux that moves up to the level of the larynx). They can also arise from surgical intubation or extended periods with intubation for ventilation. Due to the location of these lesions, they often do not affect the voice significantly. However, patients often complain of localized pain in the throat, limitation in pitch range, or vocal fatigue. Contact ulcers are generally small lesions that appear ulcerated, reddened and inflamed and often are unilateral. Treatment is often a combination of medical intervention and voice therapy.

These more diffuse lesions are found on the surface of the vocal folds and are generally considered pre-cancerous. They must be biopsied for definitive diagnosis. They are assumed to form as a result of chronic exposure to chemical irritants such as tobacco and alcohol. Luekolplakia appears as a thick white covering over one or both of the vocal folds while hyperkeratosis appears as more leaf-like irregular growths over the surface of the vocal folds. Treatment involves voice therapy and medical intervention but is most successful when the chemical irritants are removed. Thus patients are counseled heavily on smoking cessation and reduction in the intake of alcohol as well as general vocal hygiene.

These lesions are wart-like growths that are caused by HPV or human papilloma virus. These lesions grow rapidly and generally cover large areas over the vocal folds, ventricular or supraglottic structures and subglottically. They can cause respiratory compromise if not treated aggressively, generally with repeat surgeries and injections of Cidofavir. These lesions often return and patients must be seen by their ENTs several times per year for surveillance of their status. Patients often develop scar tissue as a result of multiple surgeries. This can affect the voice extensively. In addition to surgery, voice therapy is helpful in assisting patients be aware of voice quality and changes that could signal new lesion growth. Voice therapy can also assist in optimizing voice quality post-surgeries as laryngeal flexibility, among other exercises, can help to offset the detrimental effects of scar tissue development.

CEENTA has voice & swallowing specialists and ENT physicians in offices throughout North and South Carolina. They are trained in the most up-to-date technology and treatment options and will come up with a care plan personalize for your needs.

Benign Lesions TreatmentBenign laryngeal lesions are defined as abnormal growths of the vocal folds or the larynx (voice box) that are NOT cancerous. These lesions are classified as nodules, polyps, cysts, granulomas & contact ulcers, leukoplakia & keratosis, and papilloma.
This website is optimized for more recent web browsers. Please consider these upgrade options: IE10+(